Another set of allegations to add to the recent string of financial benchmark manipulation cases has concerned the ISDAfix interest rate benchmark. Fideres has conducted extensive quantitative research into these allegations for the lead class action complaint in the US and in this research alert we give an overview of the allegations and the results of our analysis to date.

ISDAfix is a benchmark for interest rate swaps in various currencies, although the current allegations are mainly focused on US dollar (“USD”) swap rates. The ISDAfix rate has historically been set on a daily basis whereby a number of panel members (most recently 9) are asked to submit their rate in line with the following guidelines:

“The rate provided by the dealer should be the mean of where that dealer would itself offer and bid a swap in the relevant maturity for a notional equivalent amount of US $50 million or whatever amount is deemed market size in that currency for that tenor to an acknowledged dealer of good credit in the swap market. The rate should not be where the dealer sees mid-market away from itself, but should be a function of its own bid/offer spread.”

ISDAfix is essentially the equivalent of LIBOR for long-term interest rates, so much so that some are even referring to this scandal as LIBOR’s sequel1 or twin brother.

What Are The Allegations?

The allegations of how panel members attempted to achieve more favourable ISDAfix rates for their trading books are focused on two different types of activity:

In the wake of these allegations, ICAP was stripped of its role in the ISDAfix process.2 The role of administrator was also passed from ISDA to ICE Benchmark Administration (“IBA”), who renamed the benchmark the “ICE Swap Rate” and updated the calculation methodology.3

What Are Our Findings? 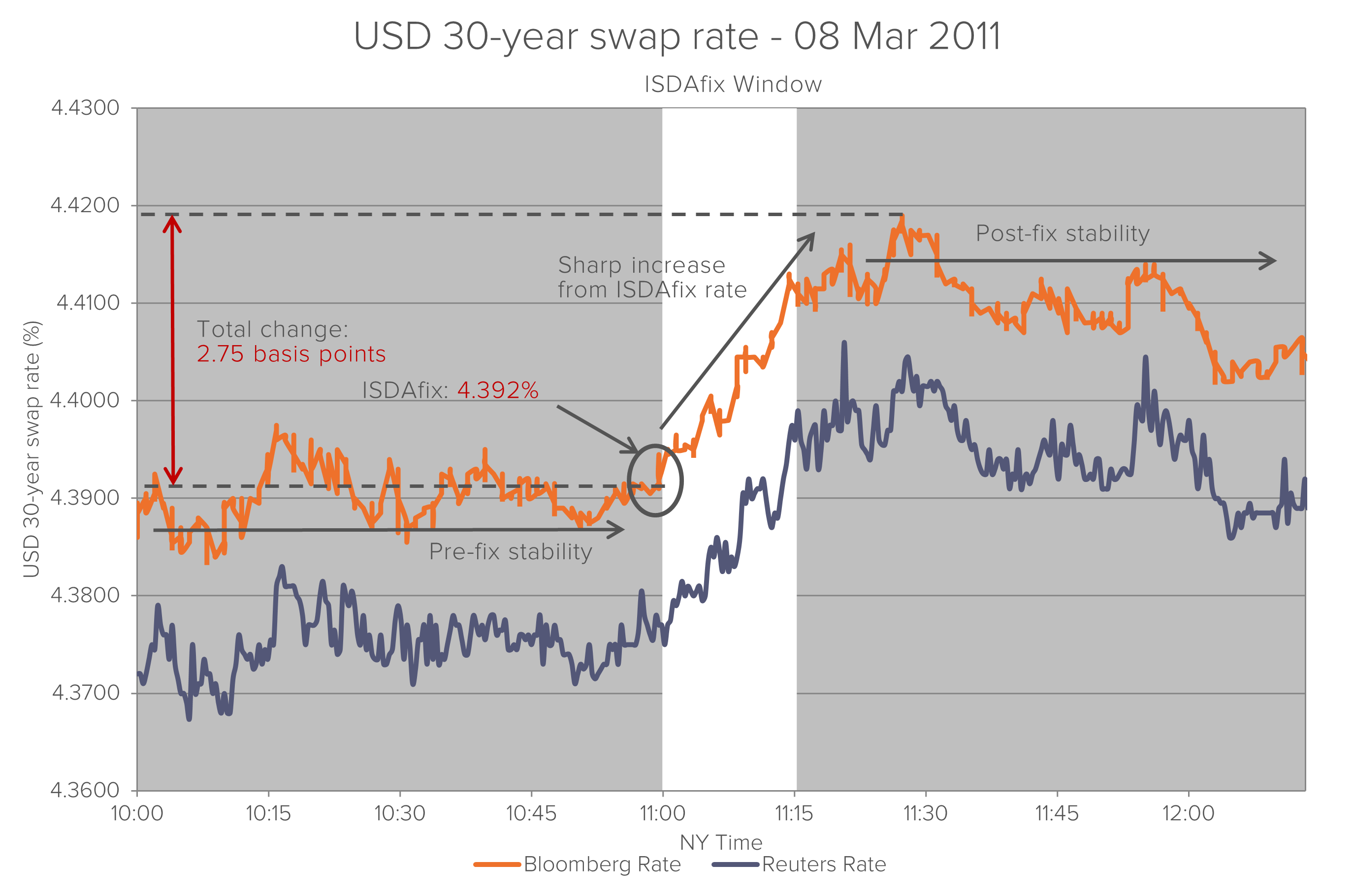 The above chart of the 30-year swap rate on March 8, 2011 highlights one of the anomalous fluctuations identified by our analysis. Here, we can clearly see a sharp increase in swap rates immediately after 11am, when the reference point is provided by ICAP. This is potentially suggestive of the delayed entry of new transactions until after the provision of the reference point in order to avoid an undesirable increase in the ISDAfix rate.

We found similarly anomalous swap rate movements on up to 20% of business days.

Interestingly, as shown in the graph below, the frequency of these anomalous observations dropped significantly after December 2012, which coincides with the date that global regulators imposed fines on UBS for its role in LIBOR manipulation.4 Such a finding is potentially suggestive of panel members restricting their manipulation attempts in the face of increased regulatory scrutiny. 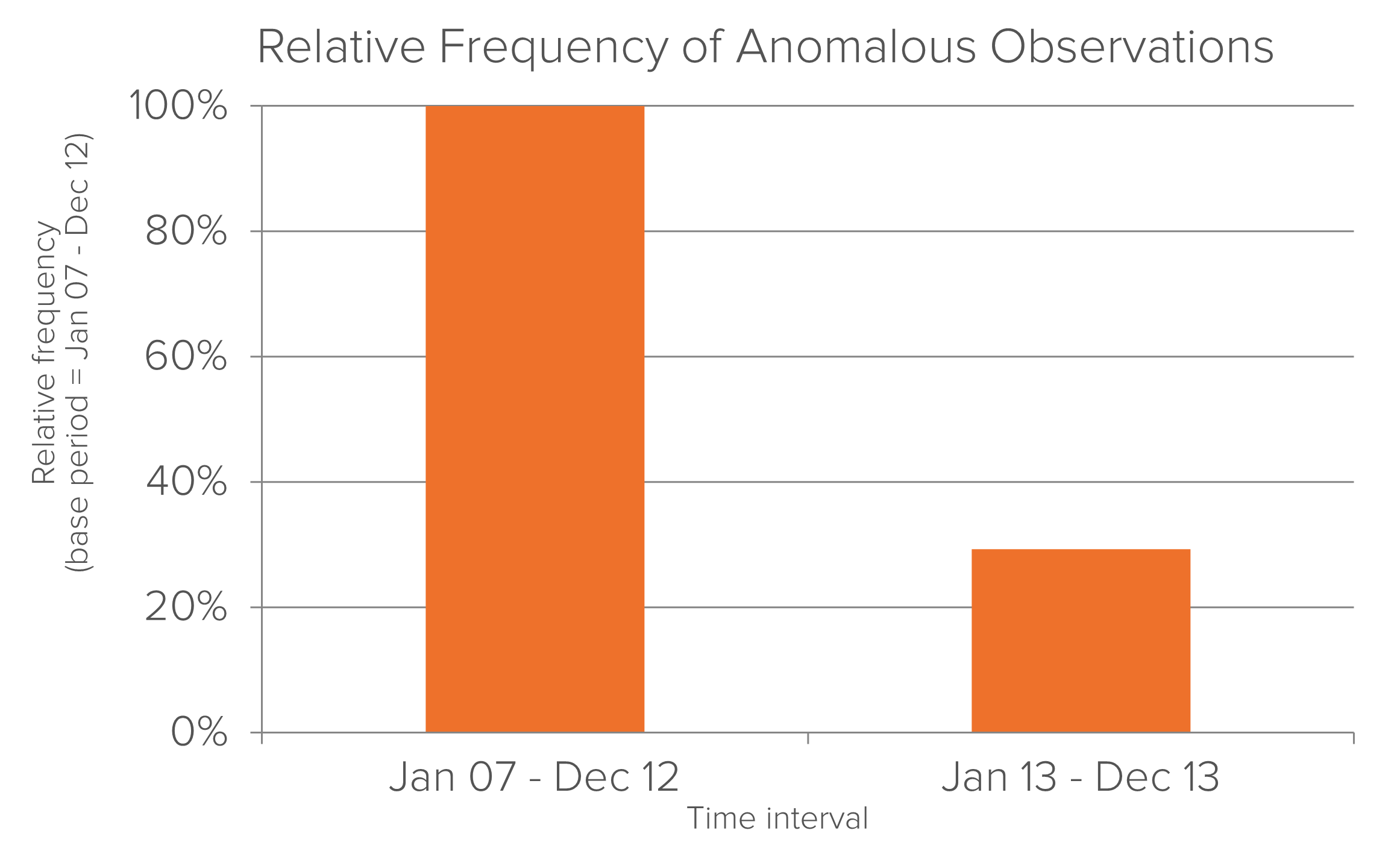 Further to this, Fideres also found that the dispersion of panel members’ ISDAfix submissions has typically been very low, with all panel members actually submitting identical rates on a significant number of days in the sample. This is quite anomalous as there is a degree of dispersion in panel members’ quotes in the swap market. As such, the lack of any dispersion in panel members’ submissions is potentially suggestive that they may not be making submissions that are consistent with their own swap market activity but that are instead consistent with the existence of some overarching agreement amongst panel members to simply accept the reference point provided by ICAP. It is for this reason that the integrity of the reference point is a central issue in the current allegations.

What Instruments Have Been Impacted?

We can split the list of affected instruments into two categories:

These products represent sizeable markets and anyone transacting in these products, either around the daily fixing window or with an order to trade at a level linked to the ISDAfix rate, is susceptible to have been damaged.

Who Has Been Impacted?

More specifically, parties such as

who use ISDAfix-linked products to hedge against interest rate losses or speculate on the future path of interest rates are among the parties most likely to have been damaged.

3 The latest methodology can be found on the IBA website