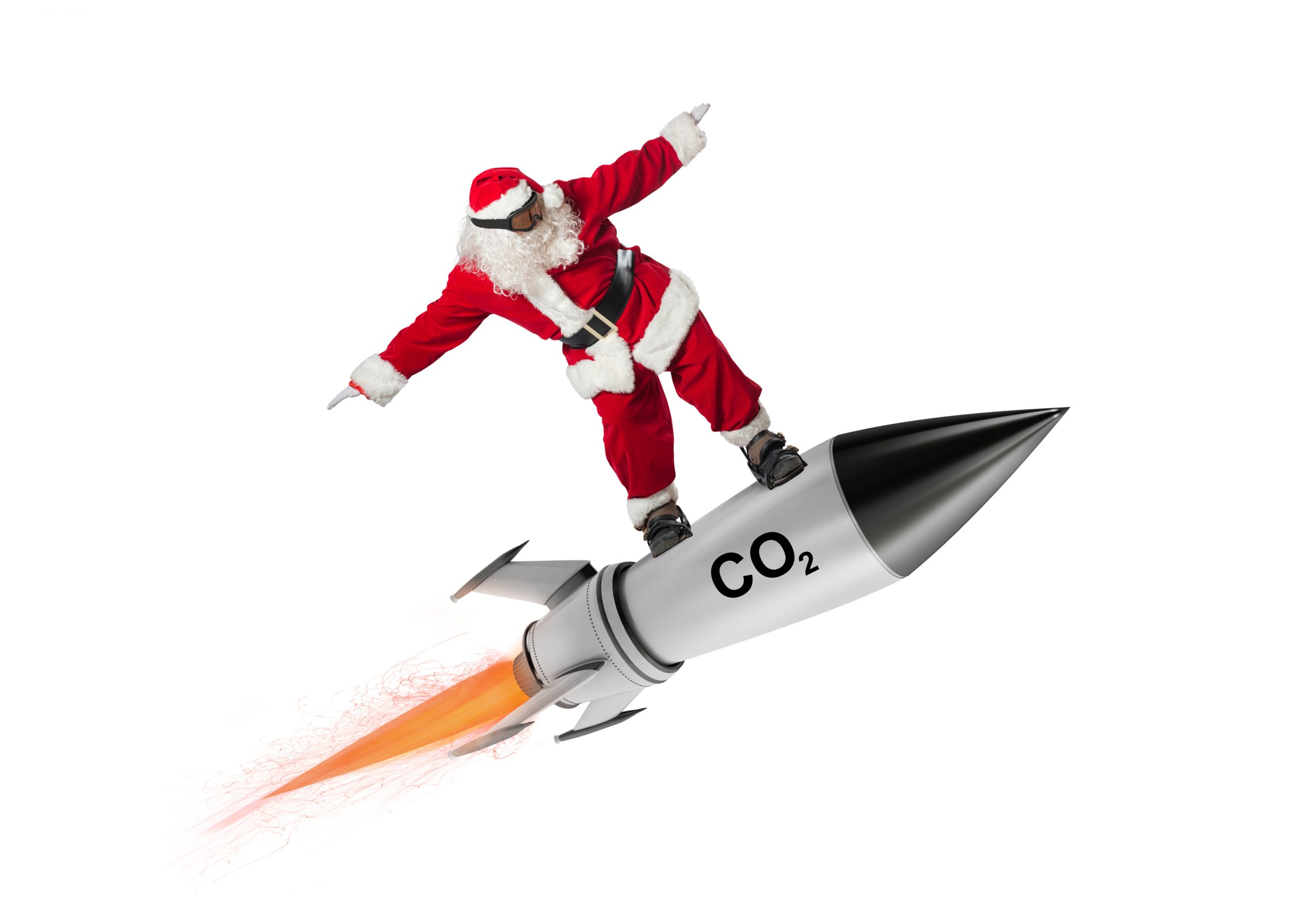 Liquid CO2 is mostly commercially produced as a byproduct of ammonia fertilizer and bioethanol. About 60% of the UK’s liquid CO2 is produced by CF Fertilisers. The other 40% is produced from Ensus, BOC or imported: 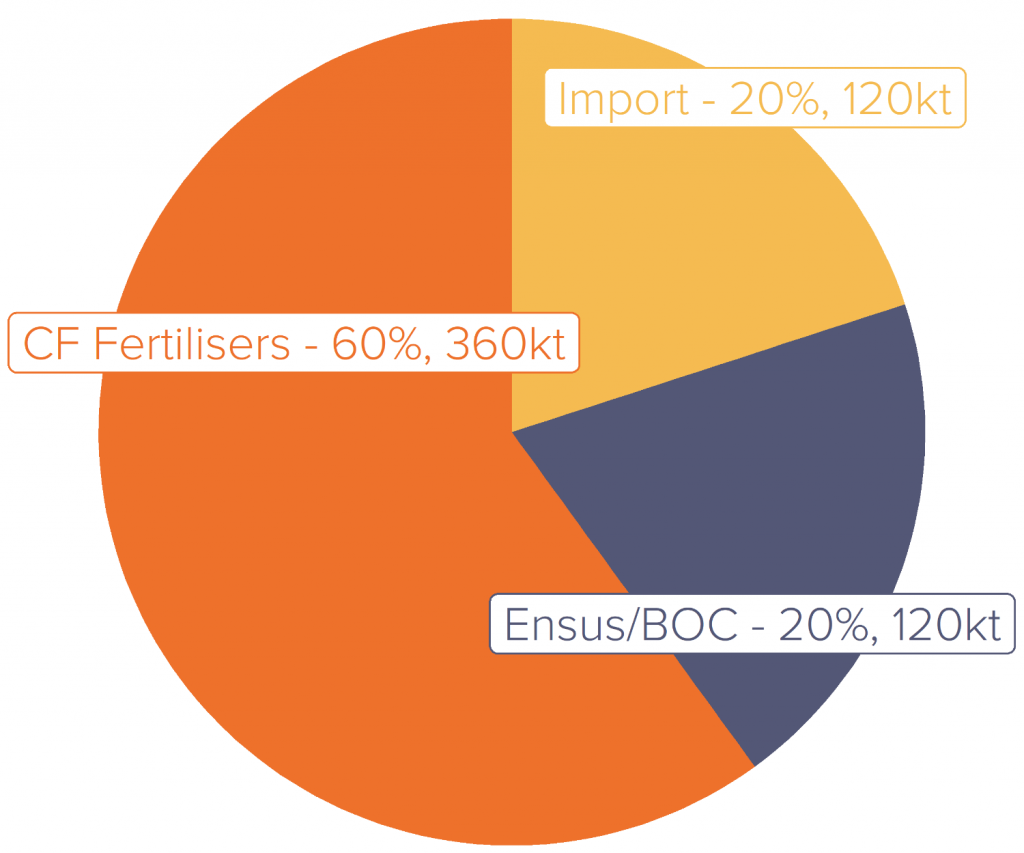 In August of this year, CF Fertilisers announced a temporary halt in its Teesside facility, which is the industry’s single largest manufacturing site.3 This came just two months after CF Fertilisers announced the complete closure of its Ince facility in Cheshire, which previously accounted for 15% of industry capacity. This left only three production sites operating in the UK: 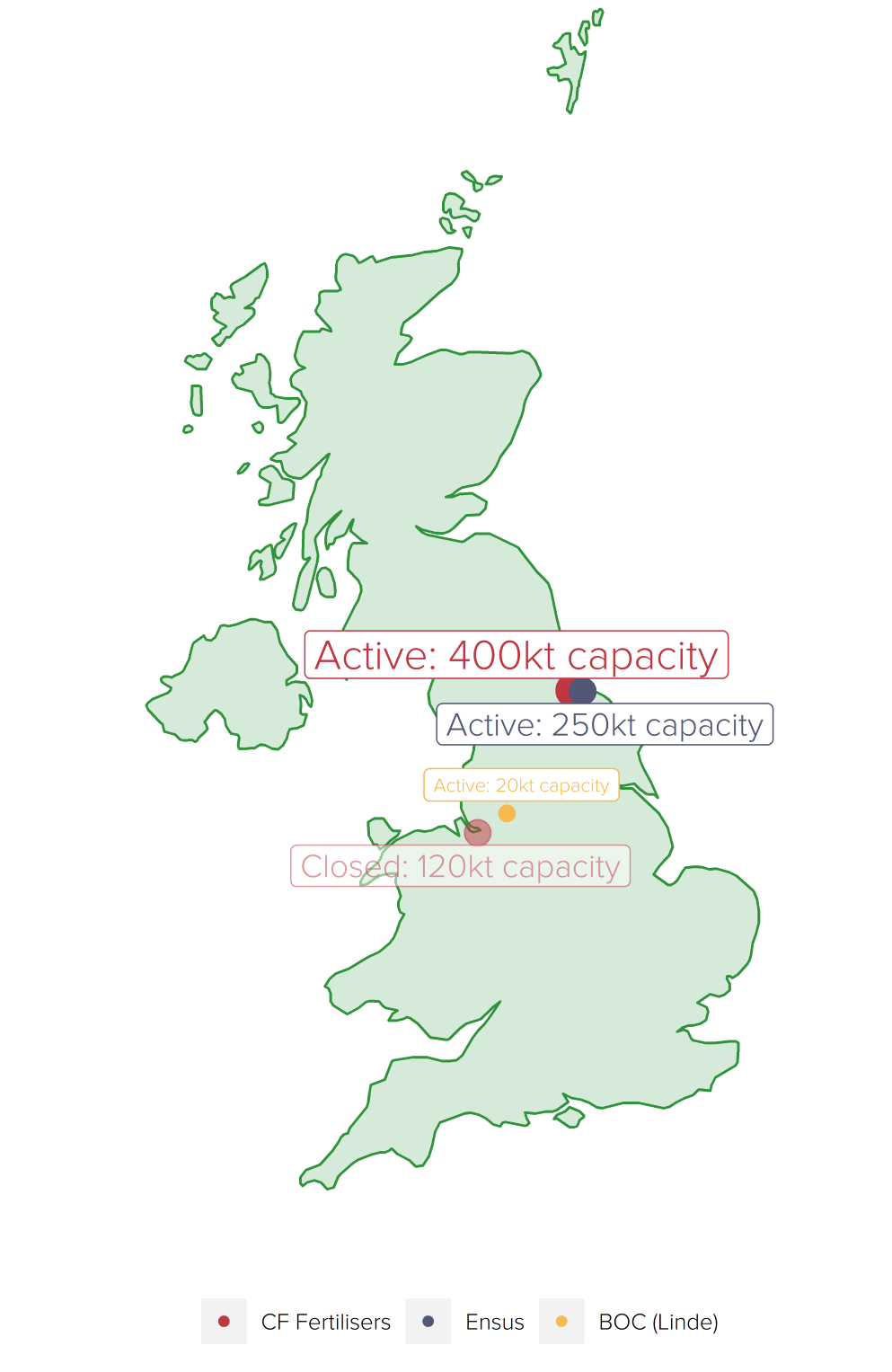 In sum, these closures meant the single largest producer of CO2 in the UK, accounting for as much as 60% of domestic consumption, had completely halted production – ostensibly due to rising natural gas prices. This disruption can wreak havoc on the Christmas supply-chain and has before.

Of the UK’s CO2 consumption, almost two-thirds goes into the food and drink industry, where it is used for slaughtering pork and poultry, preserving food, making dry-ice for shipping, carbonating drinks, and dispensing beer at pubs.5

The chief executive of the British Meat Processors Association claimed that “without sufficient CO2 supplies, the UK will potentially face an animal welfare issue with a mounting number of pigs and poultry unable to be sent for processing.”6 The British Beer and Pub Association complained that “Our pubs and brewers are between a rock and a hard place and waiting even a few weeks for the government to act could be too long. We need a sustainable plan for the supply of CO2 to our industry.”7

Interestingly, this isn’t the first CO2 shortage in the UK: Christmas shortages seem to be a recurring phenomenon. At the same time last year, a CO2 shortage in the autumn threatened Christmas itself. The owner of 2 Sisters Food Group (owner of Bernard Matthews Turkey) claimed “with no CO2 supply, Christmas will be cancelled.”8 Ocado had to limit its delivery of frozen food due to a lack of dry-ice.9 Iceland’s managing director echoed these sentiments, stating “This is no longer about whether or not Christmas will be OK, it’s about keeping the wheels turning and the lights on so we can actually get to Christmas.”10

The combined effect of the CO2 shortages on meat production, food preservation, and pubs prompted a government bailout worth an estimated £10m, in an effort to avert Christmas mayhem.11 The precise nature of the bailout remains a mystery. Then environmental secretary, George Eustice, told BBC news “I’m not going into the precise figure because government lawyers are working on the terms of the deal … it’s a commercial arrangement” – but did note the deal would cost “many million, possibly tens of millions.”12

The 2021 shortage wasn’t the first either. In 2018, there was a shortage so severe that it prompted a full report from the Food and Drink Federation. Some described the 2018 shortage as a “perfect storm” spurred by increasing demand following a heat wave and England’s almost unprecedented success at the World Cup – while unexpected breakdowns at key plants in the UK disrupted supply. However, the FDF cautioned against such simplistic explanations:

“The ‘perfect storm’ description risks giving false assurance that the events were a one off, and the impression that nothing can be done. In fact, the events were not entirely unique. Disruptions on a lesser scale have taken place several times in the last decade …. Last summer’s events were a wake-up call that we need to make the UK’s CO2 chain more resilient.”13

Indeed, the term “perfect storm” was also used to describe the 2021 shortage.14 In short, the liquid CO2 industry appears to be falling victim to a “this time will be different” fallacy. Since 2015, there have been at least four major liquid CO2 shortages on record in the UK, at least half of which have been dubbed “perform storms.”

CF Fertilisers claimed it had to cut production due to high and volatile natural gas prices – spurred by the Ukraine war – but is this true? Shortages in the UK’s liquid CO2 industry are becoming an annual Christmas tradition – and long predate the current energy crisis.

CF Fertilisers was formed in 2015 following a successful joint venture between Kemira and Terra Industries, known as “Growhow.”15 When they announced their joint venture, the CMA (then known as the OFT) investigated and found that the joint-venture “[raised] the possibility that the removal of Ince as an alternative source of CO2 may allow the joint venture to raise prices post-merger.”16

Despite these anticompetitive concerns, the joint venture went ahead and, true to the CMA’s trepidation, in June of this year, CF Fertilisers closed its plant in Ince.

Most perplexingly, CF Fertilisers has refused to sell its Ince facility – preferring to leave it dormant. This summer, the UK Nitrogen consortium, led by Lord Dannatt, bid to purchase the facility, but CF Fertilisers declined.17 This led Labour MP Justin Madders to speculate:

‘The concern I and a lot of employees have is there’s no real incentive to sell to someone who will become a competitor … The Government needs to think about the risk of having a major component of our food supply being limited to just one plant in the hands of foreign owners … There is a risk a monopoly situation will be created that will push up food prices even further.”18

Indeed, the decision to leave a manufacturing site worth millions idle, instead of selling with an offer on the table, is puzzling. Either CF Fertilisers believes it will get a better selling price by waiting, or it knows that the plant is worth more closed.

The liquid CO2 industry faces severe supply constraints which limit competitor entry/expansion. Because liquid CO2 is primarily a byproduct of ammonia fertiliser, competitors need to enter both markets and supply each product in proportionate amounts. This relationship is a contributing factor to the near annual shortages, as ammonia fertiliser production typically falls during the summer months.

In economic parlance – the liquid CO2 market exhibits high barriers to entry. These barriers create market power for incumbent firms. By refusing to sell its Ince facility, CF Fertilisers is heightening these barriers, and foreclosing the only viable route to increased competition in the industry. This would allow it to increase prices without fear of competitive constraint.

Between 2017 and 2021, total volume has remained almost perfectly constant, but the market size in GBP doubled: 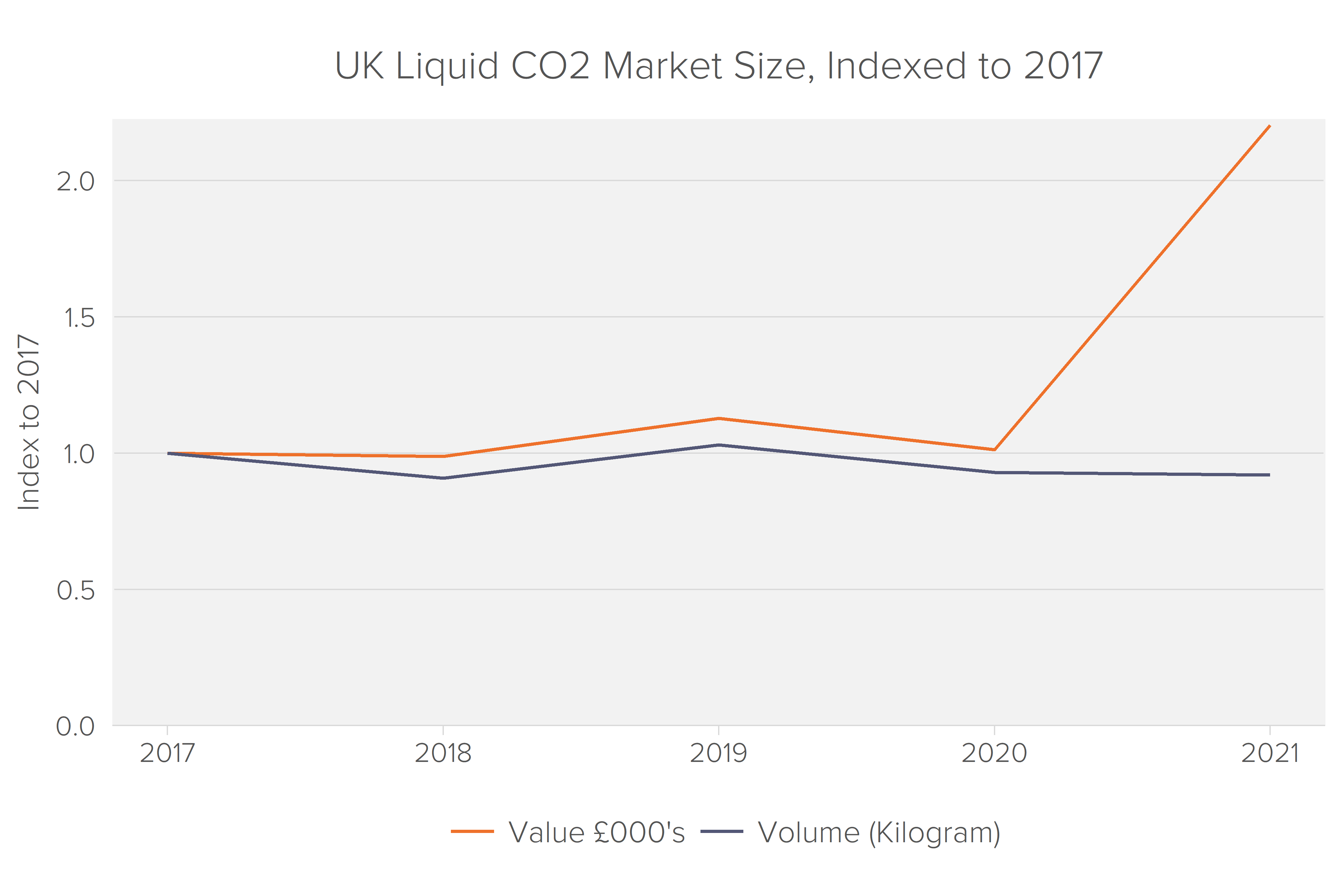 The divergence in market size as measured by GBP and volume is due to prices quadrupling between 2017 and 2021: 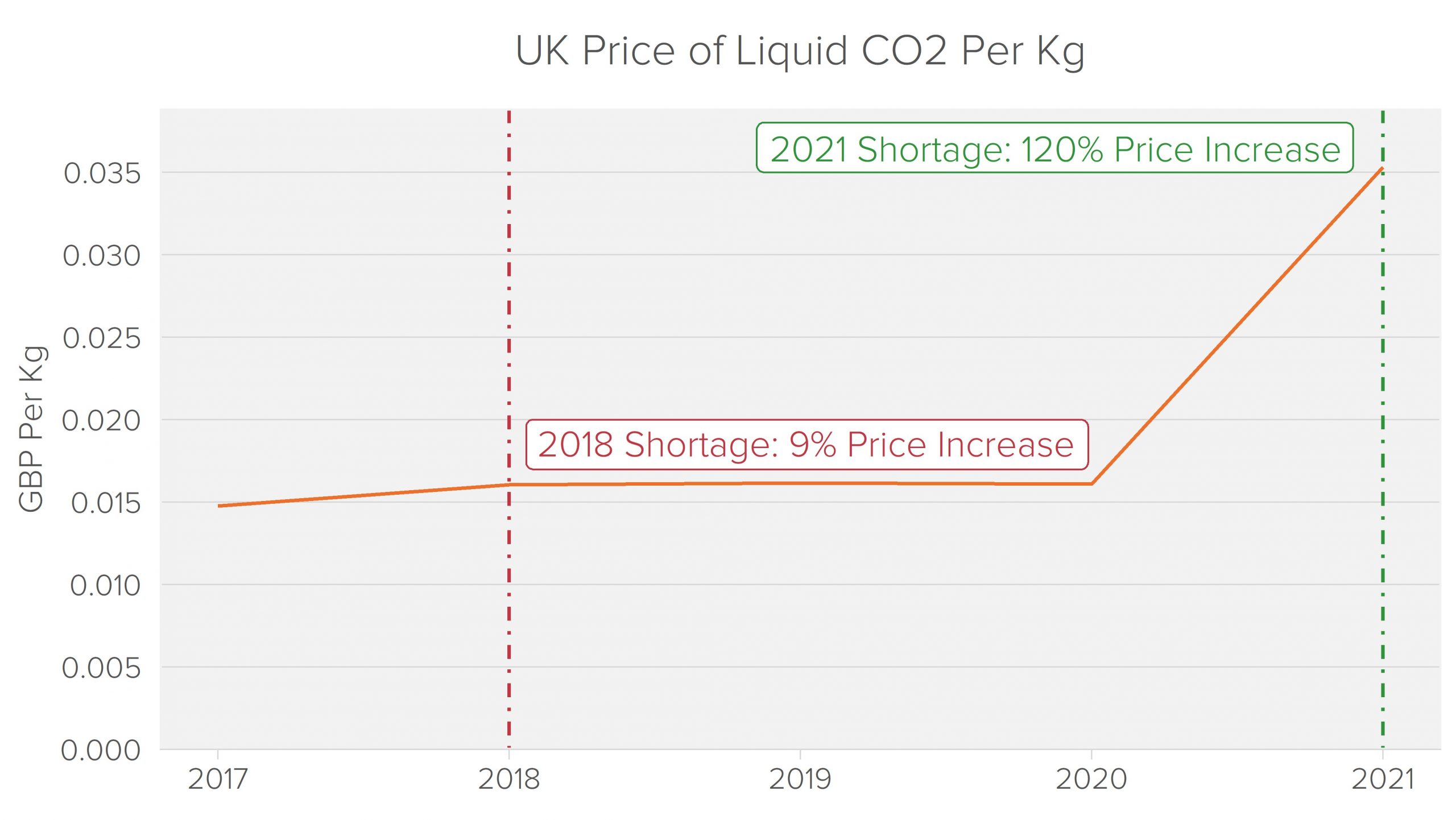 Notably, the price increases in 2018 and 2021 were both permanent and coincided with supposed “perfect storm” shortages. Since 2021, prices have only continued to rise (though Prodcom has yet to release 2022 figures), reaching as high as a reported £3 per kg of liquid CO2, or nearly 100x higher than Prodcom’s 2021 estimate.19

If these supply shocks truly were passing storms, we would expect prices to decline after the market corrects itself. Instead, we see persistently rising prices, with no sign of reversal. These price increases led the Energy and Climate Intelligence Unit to estimate that liquid CO2 could cost the UK food and drink sector an additional £1.7 billion per year.20 While this is likely an upper end estimate, as it requires the market price to durably be {100x} its 2021 level, rising CO2 prices will cost the food and drink industries tens, if not hundreds, of millions of pounds per year.

This could all, in principle, be as consistent with rising natural gas prices as it is monopolization. Indeed, that is the justification that CF Fertiliser put forward in its SEC filings explaining the closure of the Ince facility. However, this is hard to square with the company’s financial statements.

However, for the three months ending September 30th, CF Industries (CF Fertiliser’s US parent-company) reported an increase in its company-wide gross margins from 32.3% to 39.5% between 2021 and 2022.21 Further, CF Industries reported a near tripling in its USD ammonia sales in Europe between 2021 and 2022, rising from $65m to $164m, also for the three months ended September 30th.22 Finally, for the same period, CF Industries reported a 40% increase in its ammonia gross margin, rising from 24% to 33.5%.

UK sales are only a small portion of the broader company’s gross margin. However, between 2021 and 2022, the UK more than tripled its gross margin contributions:

This means that gross margins in the UK operations of CF Fertilisers increased at a faster rate than the rest of the company, which itself already had unusually fast margin growth. Further, CF Industries explicitly attributes the rise in gross margin to higher prices, and notes that the price increases were greater than the natural gas price increases:

None of these facts are consistent with natural gas prices spurring a supply shock –but rising profits and falling output are the hallmark of monopolization.

Paul joined Fideres after completing a BSc in Economic History at the London School of Economics and Political Science. At LSE, Paul was a Trustee of the Student Union and President of the Music Society, having previously performed with two national choirs in the US. At Fideres, Paul leads our discrimination practice, analysing cases of algorithmic and indirect discrimination, in addition to his work in the Competition team, where he is a project manager. On the Competition team, Pauls’ work spans financial markets, with his research on bond market manipulation published by the ABA, digital markets, and industrial organisation.

Raw sewage spills by UK Water Companies amount to an abuse their dominant position as regulated monopolies, UK households could be entitled to compensation.