Posted at 16:40 in Research by Michele Pau

When government agencies or corporates issue a bond, they generally engage a large bank to act as a dealer (also called an “underwriter”). The bank’s role is to assess the level of demand and fill out an order book of initial buyers for the bond. Based on its knowledge of the market and its contacts with buyers, the bank recommends a level of “yield” (the return to an investor) for the bond in order to attract enough buyers to ensure the bond is fully placed on issuance. The underwriter may even act as a buyer itself in some cases.

Because both buyers and sellers of bonds rely on their underwriter for information about the market, underwriters are in a position of strength, when it comes to representations of the relative level of supply and demand. Distortions in this process can take different forms and can harm various market participants in multiple ways.

Fideres has identified a variety of specific mechanisms by which bond markets might be manipulated by underwriters or dealers, to the detriment of both issuers and investors.

In an issuance, an underwriter determines the yield – how much the issuer will have to pay to the buyers holding the security – and therefore the value of a bond. After placement, (i.e. the primary market), bonds can be subsequently resold on the secondary market. If the underwriter has gauged the level of demand in the market properly, the secondary resale price of the bonds should on average be similar to the initial price paid by the primary market buyers.

Cartelists, however, can use their information advantage to compel an issuer to set bond yields excessively high, so that the primary buyers get a high-value bond for below-market rates. This practice creates a distinctive pattern in affected markets: a rapid and drastic increase in the price of the bond immediately after issuance.

A low level of underpricing in the primary market is considered normal, to compensate for the underwriter’s inventory risk, as well as to convince investors to divest from their current debt holdings. This is legitimate and explains why even the underwriter’s own bonds may be priced at a slight discount in the primary market. However, comparisons between the discount observed on underwriters’ own bonds, and those observed on their clients’ reveal a striking difference, with the latter being considerably larger.

The ability and incentive to underprice excessively emerges from mutual assistance within the cartel. Underwriters may issue underpriced bonds to their best clients, consistent with SEC investigations into the unfair allocation of bonds during the syndication process. Otherwise, the same favour may be directed to other underwriters as a quid pro quo. In addition, the underwriters themselves may retain a large portion of the issuance, and benefit from the underpricing, which allows them to resell the same bonds at a higher price on the secondary market.

Fideres has analyzed aggregated, annualized data on bond issuances provided by Bloomberg and a granular sample of municipal bond issuances and trades between 2006 and 2015. We find evidence that underwriters are systematically underpricing municipal bonds. Consistent with the issuance underpricing mechanism of distortion, the post-issuance price increase is abnormally high in this market compared to similar securities. 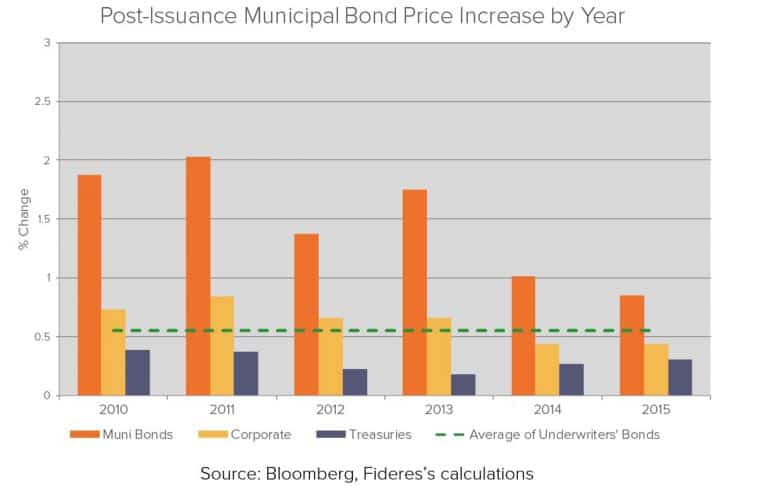 Fideres has estimated damages to issuers in the municipal bond market as the excess interest payments that would be paid over the life of the bond, by analyzing a sample of the largest US issuances and extrapolating our findings to the universe of municipal bonds issued between 2006 and 2015.

Using this method, we estimate that municipal bond issuers alone will wind up paying approximately $25bn more than they would have had underwriters priced their clients’ bonds as accurately as they were able to price their own.

Another mechanism by which a cartel might harm the bond market is through the inflation of bid-ask spreads. This means exaggerating the cost of dealing services in order to extract more from both buyers and sellers.

In principle, other dealers should be able to win business away from a spread-exaggerating competitor by charging a fair rate. In the presence of a collusive cartel of the most dominant dealers, however, all players can explicitly or tacitly agree to maintain spreads well above cost.

We refer to bonds issued by supra-national agencies and non-US Agencies as SSA Bonds. SSA bonds and the respective sovereign bonds largely share the same risk factors and liquidity dynamics and, as a result, the difference in bid-ask spread between the two is generally expected to remain constant over time.

However, a US class action complaint (In Re: SSA Bonds Antitrust Litigation) alleges that during the class period, the bid/offer spreads for non-US Agency Bonds were on average 4.6 basis points higher than Sovereign Bonds, while outside of that period, the bid-ask spreads were only 3.2 and 3.4 basis points higher. This variation in spread differentials would be consistent with the existence of an SSA bond trading cartel, allegation which is currently being investigated by the European Commission1. 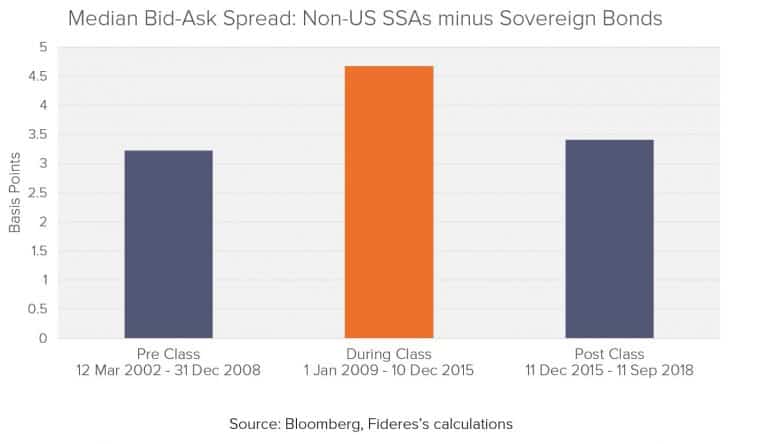 Most sovereign bonds are issued via auction rather than the process of direct placement described above. Even where bond issuances are matched with buys through this ostensibly competitive mechanism, however, the process can still have distorted outcomes where cartelists are able to dominate the bidding.

The premise of an auction is that a correct market price is found through competition between bidders. By collaborating on their bids, cartelist bidders tend to be allocated bonds at a price below the market rate.

In a competitive auction process, the discrepancy between the winning bids and the appropriate price (i.e., the price that would be obtained in the secondary market) is arbitraged away by non-cartel bidders. Indeed, an individual cartelist who submits a non-winning bid forgoes the profit that would be achievable in the short run from winning the auction then reselling on the secondary market. The behavior is only self-interested in the context of ongoing collusion across many bond auctions, in which cartelists take turns “winning”.

In a 2017 US complaint (In Re: Treasuries Securities Auction Antitrust Litigation) it is alleged that between 2009 and 2015 cartelist bidders have consistently manipulated auctions of US Treasuries, by leveraging their informational advantages.  In the complaint, the manipulation took either of two forms, depending on the observed level of demand. In low-demand auctions, the cartelists’ colluded to place similarly low-priced bids, in order to be able to obtain the security at a discount. In high-demand auctions, instead, the cartelists outbid the other participants, in order to secure a given Treasury using illegally obtained information about other dealers’ bids.

To substantiate these claims, the complaint reports that on average during the class period, the yield spread implied by auction prices and secondary markets prices was approximately 0.7 basis points on high-demand auctions and 1.6bps on low-demand auctions. This difference fully disappeared outside of the class period, with both yield spreads hovering around 1.4 basis points. These patterns, which allegedly affected 75% of the auctions in the class period, are indicative of a poor auction result, and potential bid-rigging between the largest primary purchasers of treasuries.

The complaint found that during the class period, 46.9% of newly issued treasuries were allocated to dealers, against only 35.1% after it. 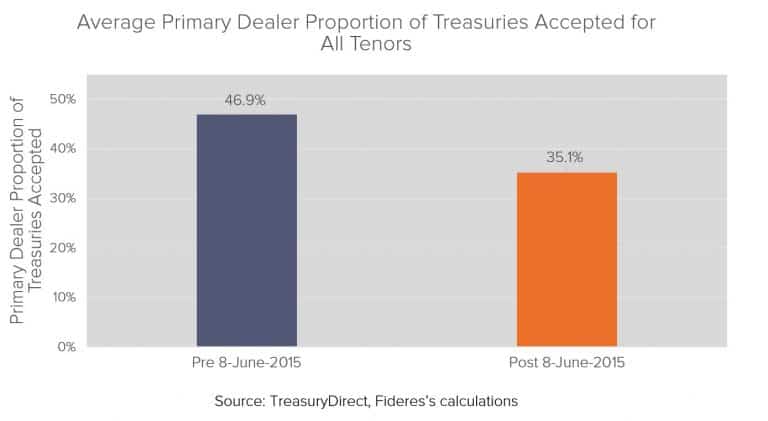 The decline in the percentage of instruments allocated to dealers may have either been a result of cartelists’ reduced interest in Treasuries, which no longer yielded cartel profits, or by the loss in efficacy in the bids of dealers, who no longer had knowledge of other players’ bids.

A recent and striking pattern that has been uncovered in the Japanese bond markets represents another form of manipulation distinct from those discussed above. Underwriters are unable, or unwilling, to find buyers for large proportions of the bonds they are tasked with placing into the market.

Unlike the practice discussed above, in which demand is misrepresented as low in order to issue at a lower price, this effectively misrepresents demand for an issuance as too high in order to disguise a poor initial estimate. This misstatement appears to be possible because of Japan’s unusually low transparency requirements in Japanese domestic bond markets.

Generally speaking, if banks are unable to find enough buyers for a bond issuance, the issue price has been set too high. Consistent overpricing in the initial issuance would therefore be visible in the market data as a post-issuance price fall, an opposite phenomenon to the price rise seen in the US corporate and municipal bond markets.

In the short term at least, bond issuers actually benefit from an overpriced issuance as long as the underwriter absorbs the “loss” and takes on all of the unplaced bonds as inventory. Primary buyers, on the other hand, could be damaged by paying a higher price than a more transparent market would bear.

Why do these distortions persist?

Ostensibly, issuers who suspect dealers of underpricing can shop their business around to other underwriters. But if all of the major underwriters close ranks to underprice their issuances, issuers not only lose the ability to issue at a competitive rate—they lose any reference point for what an appropriately-priced issuance looks like.

The incentives for the manipulations, and its perpetrators, are the same as in any other financial manipulation case in recent years. The system described above, in which a small bloc of elite banks both hold bonds and determine the price (through auction or direct placement) of those bonds, contains a built-in conflict of interest. These banks are incentivized to price away from the market when they can exploit the information asymmetry amongst themselves.

Competitive forces alone cannot be relied upon to correct this problem when the major market participants are so few – in Fideres’s analysis of municipal bond markets, 80% of underwriting is accomplished by just 6 banks. 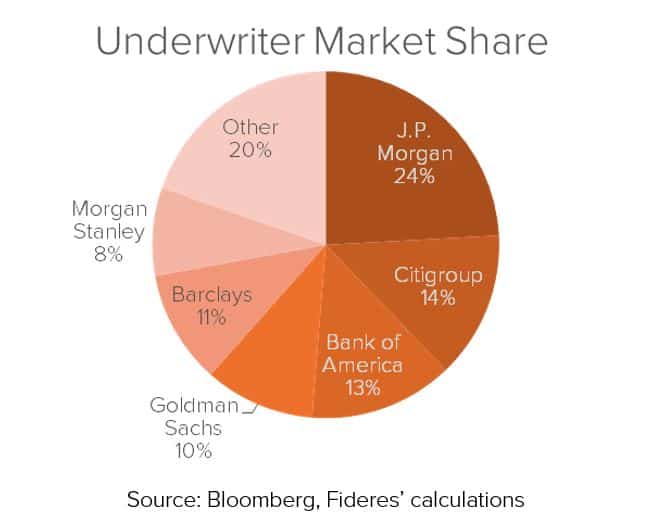 The harm done by this sort of arrangement should be of particular interest to regulators because much of it falls on the public purse. Sovereign bonds are the primary means by which the national and state governments raise short term capital to cover their commitments. To this end, an inexpensive and well-functioning bond market is crucial to their operation. If issuers are paying higher yields to place the same amount of bond value than they would otherwise need to, this comes out of taxpayer’s pockets in the form of more expensive government debt.

In other financial product markets, the migration of financial activity to electronic exchanges has eliminated much of the potential for mispricing. Fideres applauds the recent spate of regulatory investigations in the interest of restoring fairness and transparency to these markets.

A number of regulators have launched investigations into national and state-level municipal bond markets in recent months, signaling both an increasing awareness of the potential problems and a willingness to bring any wrongdoing into the light. 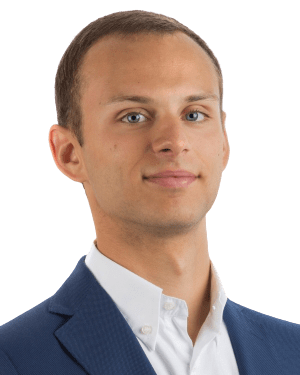 Michele joined Fideres in 2018 after completing his MSc in Finance at Warwick Business School. Since joining, Michele has worked on a number of financial and non-financial projects, spanning from pre-filing to class certification. His field of experience encompasses cases on benchmark manipulation, order-book spoofing, bid-ask spread inflation, cryptocurrency manipulation and healthcare antitrust among others. In addition, in order to address the projects’ needs, Michele has built numerous software solutions, including statistics and visualization packages and ETL pipelines.