Twombly Or Not Twombly?

Home » Twombly Or Not Twombly?

In this issue we examine the impact of the Twombly Supreme Court decision on case dismissals and at the fines handed out by the major antitrust regulators around the world.

Over the past 25 years, the number of US civil antitrust cases (under section 1 and section 2 of the Sherman Act) has remained range bound with 400 to 800 cases being filed every year. Only in the run up to the global financial crisis period, did filings fall outside this range. The highest number of cases was seen in 2008 with 1,318 civil antitrust claims being filed in the US District Courts.  The number of cases recorded in the District Courts seems relatively stable compared to other types of cases such as Securities, Commodities, and Exchanges cases which appear to be more cyclical.

The Impact of Twombly

The US Supreme Court decision in 2007 in Bell Atlantic Corp. v. Twombly1  set the new standard of evidence needed to successfully plead an antitrust claim. Over the past 15 years, 87.75% of antitrust civil cases in the District Courts were either terminated before pretrial stage or no court action was taken at all. Only 1.48% of cases are terminated during or after trial.

In order to assess the impact of the Twombly decision on the number of cases brought under different antitrust laws, we have compared the eight years prior to the decision with the eight years after. We found that the average annual number of investigations initiated under specific antitrust laws declined. Sherman section 1 claims, which focus on restraint of trade and which are most closely related to the Twombly case, fell by 44.9% in the post Twombly period analyzed. 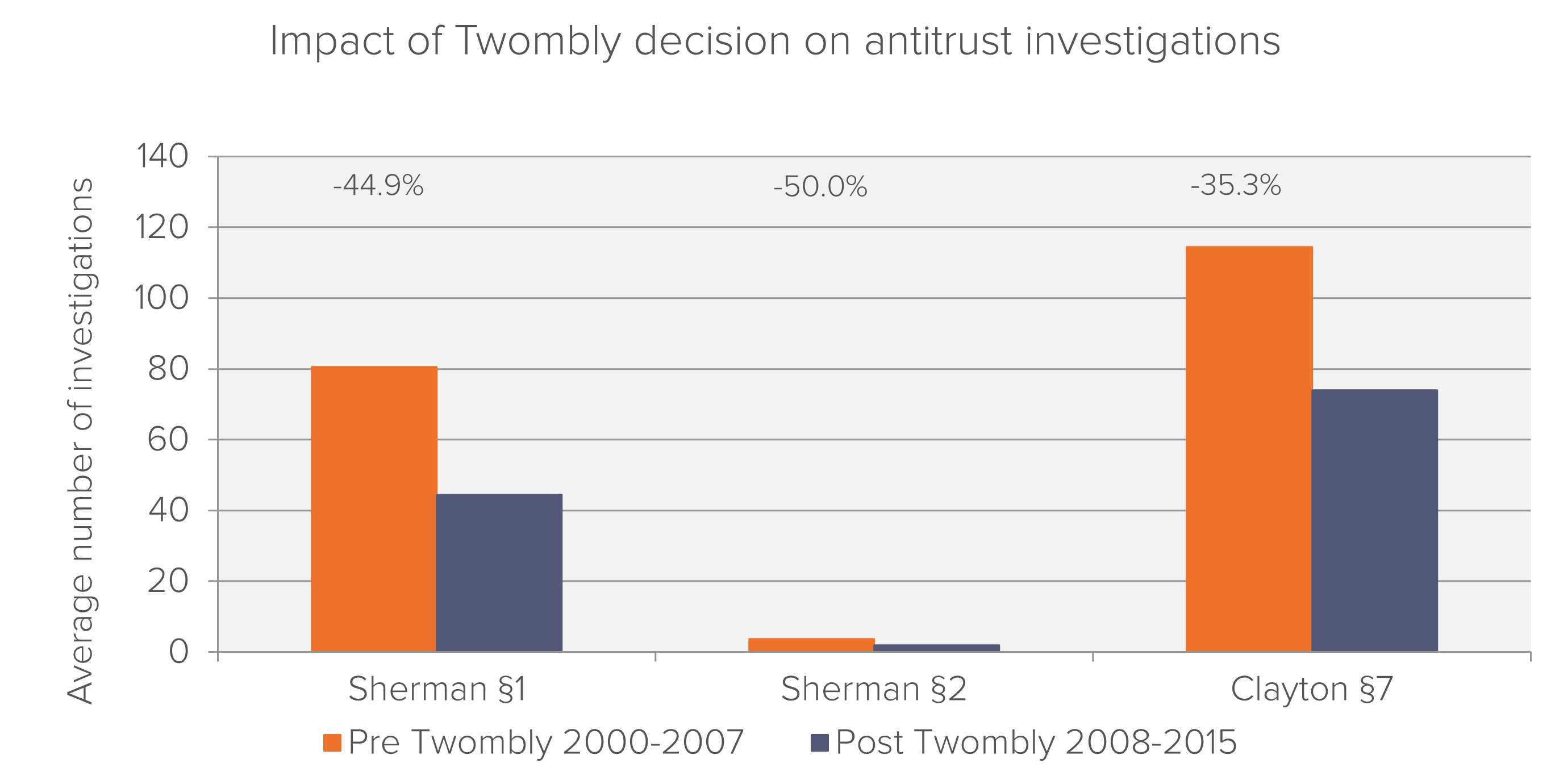 The European Union has been at the forefront of cartel enforcement over the past 5 years, with aggregate fines of $8.28bn.  The US follows closely behind with aggregate fines of $6.89bn over the same period. The fines imposed by the US Department of Justice in the fiscal year up to September 2015 were dominated by large foreign exchange market investigation fines, which accounted for approximately 88% of the total 2015 criminal antitrust fines for the US.

We can expect the 2016 EU figures to be boosted by the European Commission’s €2.93bn fine to a group of truck producers for participating in a cartel. The fines, which were announced in July 2016, are in relation to collusion of truck pricing which took place over a 14 year period3.

As a result of the higher pleading standards imposed by Twombly, recent antitrust cases have increasingly relied on regulatory enforcement notices as evidence of the plausibility of the collusive allegations.

In addition, reliance on advanced investigative economic analysis to assess the so called “plus factors” has played an important role in many of the recent cartel cases surrounding the financial sector in order to increase the chances of surviving at motion to dismiss stage.

We will write about our experience in producing economic evidence of plus factors in a future Research Alert.