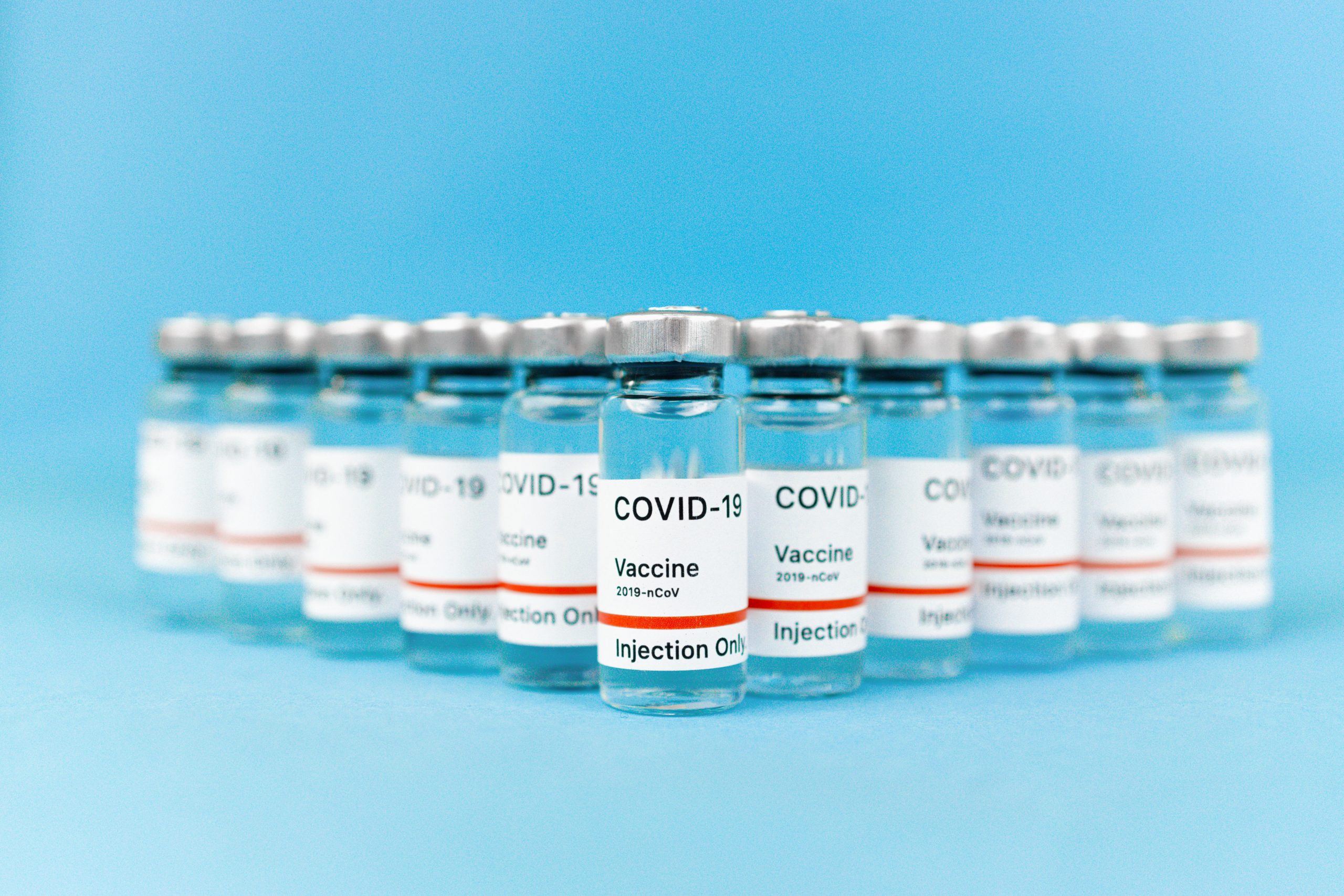 Was The UK Vaccine Rollout Discriminatory?

Race for a Vaccine

On 11th March 2020, the World Health Organization (WHO) declared the Covid-19 outbreak a pandemic.1 The UK government committed to finding a vaccine to treat and prevent Covid-19, dedicating £20 million to vaccine development in February 2020. When these funds were announced, former Health Secretary Matt Hancock said: “Vaccines are our best defense against a host of deadly diseases, including coronavirus.”2

On 2nd December 2020, the UK medicines regulator gave approval for use of the first Covid-19 vaccine, developed by Pfizer/BioNTech.3 Less than a week later, Coventry grandmother Margaret Keenan became the first person in the world to receive the vaccine outside of trials.4 Since then, over 88 million doses have been administered in the United Kingdom.5

The Oxford/AstraZeneca jab, developed in the UK, was approved on 30th December 2020, and first deployed on 4th January 2021. Meanwhile, the Moderna vaccine, approved on 8th January 2021, was not included in the rollout until 7th April 2021.6

Minority ethnic groups are between two and four times more likely to die as a result of Covid-19 compared to those from a White ethnic background, according to data from Public Health England.7 However, these minorities also report greater vaccine hesitancy compared to other ethnic groups. A 2020 UK-wide survey found that Black and Black British adults had the highest rate of vaccine hesitancy – around 70%. They were followed by Pakistani and Bangladeshi respondents at 42%, with White British or Irish respondents trailing at 15%.8

The Scientific Advisory Group for Emergencies (SAGE) raised concerns that low vaccine uptake among ethnic minorities was a result of historical institutional discrimination. For example, Black women are four times more likely to die in pregnancy and childbirth than White women in the UK, while women from Asian ethnic backgrounds face a risk twice that of White women.9

In a report, SAGE experts said: “Minority ethnic groups have historically been underrepresented within health research, including vaccines trials, which can influence trust in a particular vaccine being perceived as appropriate and safe, and concerns that immunisation research is not ethnically heterogenous.”10

Differences Between the Vaccines

The AstraZeneca vaccine has received considerable negative press coverage since its approval in the UK on 30th December 2020.11 After reports of extremely rare side effects, such as blood clots, the Joint Committee on Vaccination and Immunisation (JCVI) advised that adults aged under 30 without underlying health conditions should be given an alternative vaccine.12

The AstraZeneca vaccine was also said to be less effective than the Pfizer alternative. For the Alpha variant of Covid-19, two doses of AstraZeneca offer 86% protection against hospitalization while Pfizer gives 95% protection.13 Recent Public Health England research has shown that this efficacy gap is smaller with the Delta variant, where AstraZeneca and Pfizer offer 92% and 96% protection respectively.14

The UK only began to roll out its third coronavirus vaccine, made by Moderna, in April 2021.15 This means that there is less data on its efficacy, but Public Health England reports that one dose of the Moderna vaccine offers 72% protection against symptomatic disease (compared to 61% for Pfizer).16

The efficacy and risk differences between the vaccines are minimal, and the medical consensus has consistently been that a vaccine from any of the approved manufacturers provides a safe defence against the deadly coronavirus. When the JCVI advice on offering the AstraZeneca jab to young people changed, the UK’s Medicines and Healthcare products Regulatory Agency said: “Our position remains that the benefits of the COVID-19 Vaccine AstraZeneca against COVID-19, with its associated risk of hospitalisation and death, continue to outweigh the risks for the vast majority of people.”17

However, these distinctions and the reports of side effects have contributed significantly to vaccine hesitancy in the UK.18

When the highly infectious Delta variant began to spread in England, Fideres noticed that regional infection hotspots were often in areas with high ethnic minority populations.19 For example, Manchester, Birmingham, and Bradford – all identified as cities with high numbers of Delta cases – are each residence to large ethnic minority groups.20 This observation, alongside the higher Covid-19 mortality and vaccine hesitancy rates among ethnic minorities and the history of institutional racism in healthcare, led Fideres to investigate whether the vaccine rollout was fair, both for minority ethnic groups and between different regions.

Fideres sent Freedom of Information (FOI) requests to every NHS Clinical Commissioning Group (CCG) in England, asking for a breakdown of each type of vaccine administered in the CCG area by month and ethnicity.21

The resultant dataset comprised information from 34 CCGs across England, covering over 21 million vaccine doses administered between December 2020 and May 2021.  This provides a representative sample of the Covid-19 vaccine rollout.

Fideres aggregated the CCG FOI data into six ethnic groups: ‘Black, African, and Caribbean’; ‘Indian, Pakistani, Bangladeshi, Chinese, and any other Asian background’; ‘White, Irish, and British’; ‘Mixed and Multiple Ethnic’; ‘Any other ethnic group’; ‘Not stated or unknown’.

There is remarkably little variation in the proportion of each ethnic group receiving each vaccine type. Within all six ethnic categories, around 40% received the Pfizer vaccine and 60% were given AstraZeneca. Due to the late entry of the Moderna jab into the vaccine rollout, less than 1% of each ethnic group had received this jab by the end of May. It is important to note that this distribution was the same even within the category of people refusing to state their identity – many of which are likely to have belonged to ethnic minority groups. 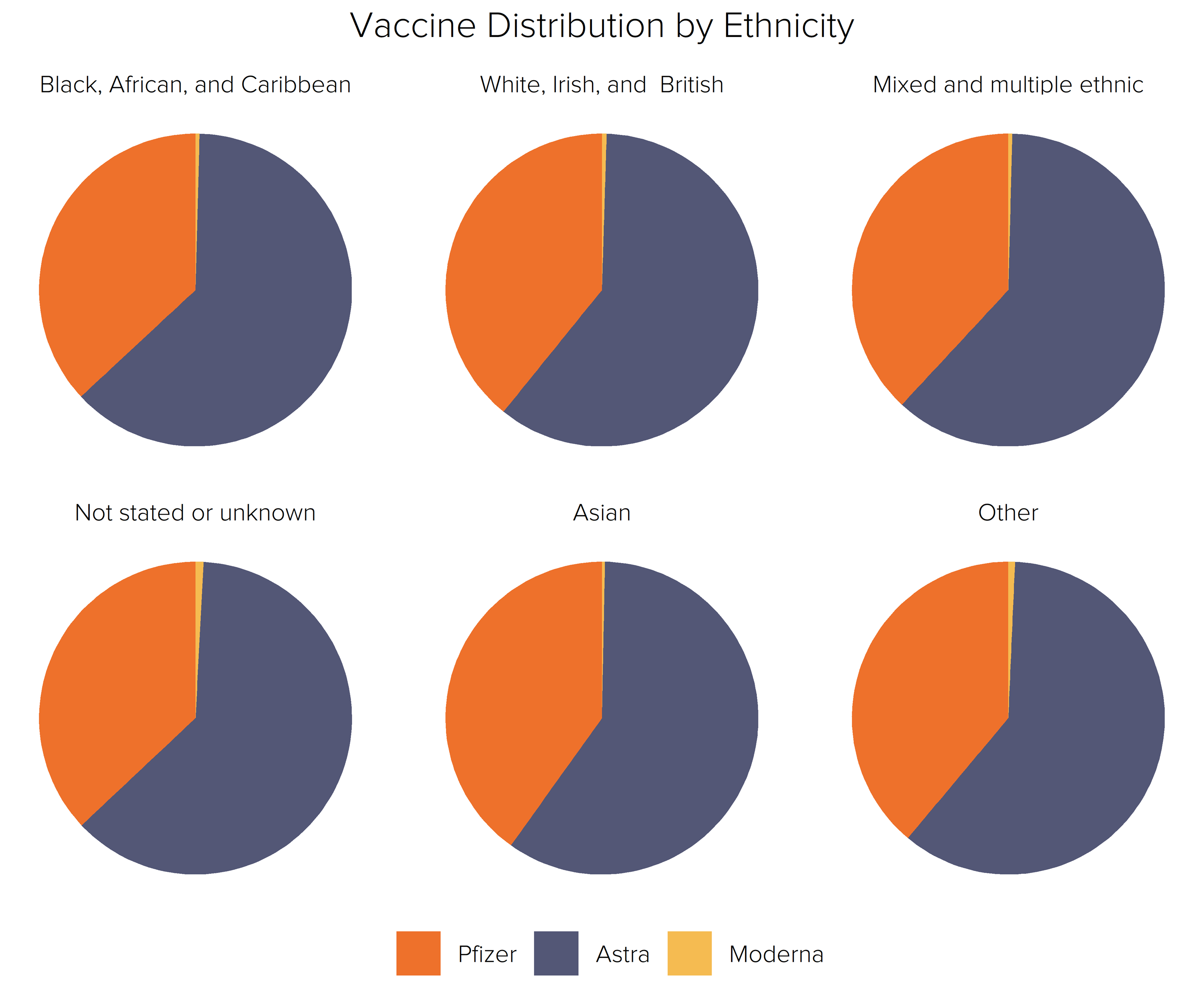 AstraZeneca jabs dominate this data because this was the most abundant vaccine in the UK’s supply. By January 2021, the UK government had ordered 40 million Pfizer doses versus 100 million of the AstraZeneca jabs.22 Despite the restrictions placed on administering the UK-developed doses to young people, and despite Pfizer’s earlier approval and deployment, the majority of vaccines administered before May were manufactured by AstraZeneca.

On 8th June 2021, people aged 25 and over became eligible to book a vaccine appointment.23 This marked the start of the vaccine rollout for those young people advised against getting the AstraZeneca jab, meaning that the data since May is likely to show a rise in the Pfizer and Moderna vaccines administered. There is no evidence that this change will affect the fairness of the vaccine rollout.

The proportions of AstraZeneca, Pfizer, and Moderna vaccines administered within each NHS area varied slightly more, but remained largely equitable. For the majority of the CCGs in Fideres’s dataset (84%), between 50% and 65% of vaccine doses administered were manufactured by AstraZeneca.

Notable outliers are NHS East and North Hertfordshire CCG and NHS Blackpool CCG. Within these CCG areas respectively, 70% and 74% of the vaccines administered were manufactured by AstraZeneca. A low 28% and 26% of their respective doses were made by Pfizer. However, these results appear to be anomalous rather than a symptom of regional discrimination in the NHS’ vaccine administration.

1 A comprehensive timeline of the Covid-19 pandemic to January 2021 can be found at https://news.sky.com/docs/COVID_Crisis_LearningTheLessons_Timeline.pdf

9 This is according to an Oxford MBRRACE-UK report from January 2021. https://www.theguardian.com/global-development/2021/jan/15/black-women-in-the-uk-four-times-more-likely-to-die-in-pregnancy-or-childbirth; https://www.npeu.ox.ac.uk/mbrrace-uk

20 According to the 2011 census, 33.4% of Manchester’s population and one third of Bradford’s population is comprised of ethnic minority groups, while 19.5% of Birmingham’s population identify as Pakistani and Indian. https://www.birmingham.gov.uk/downloads/file/9742/2011_birmingham_population_and_migration_topic_report;https://bradobservatory.files.wordpress.com/2014/06/geographies-of-diversity-bfd-jun14.pdf;  https://www.birmingham.gov.uk/downloads/file/9742/2011_birmingham_population_and_migration_topic_report

21 Clinical Commissioning Groups are constituent parts of NHS England. They commission most of the hospital and community NHS services in their respective local areas, and many were responsible for their local vaccine drives. https://www.england.nhs.uk/ccgs/

Ellie joined Fideres in June 2021 after completing her MA in Investigative Journalism at City, University of London. She has experience in financial, data, and investigative research, having previously worked with the likes of the Investors Chronicle (Financial Times), Private Eye, and Wired. She has a track record of using open source material and whistleblower interviews to develop investigations from scratch. Ellie also holds a first-class BA in History from the University of Cambridge. In her free time, Ellie plays rugby and enjoys weight lifting.